After eleven years, an official ministerial-level meeting took place between Ankara and Damascus. The December 2022 meeting in Russia is the first of many that could lead to a direct meeting between Recep Tayyip Erdogan and Bashar al-Assad. So how has Turkey changed its policy so drastically?

For months, the public and analysts have speculated about a new Turkish-Syrian military operation against the Syrian Democratic Forces in Syria, which is the local US-backed force dominated by the People’s Protection Units (YPG), the Syrian branch of the Turkish Kurdistan Workers’ Party (PKK) and a terrorist organization designated by Turkey and the United States. Speculation increased after the November 2022 bombing on Istanbul’s Istiklal Street, in which tests targeted the YPG, especially when Turkey launched Operation Claw-Sword and bombed several positions in Syria and Iraq, which was perceived as preparation for a ground assault.

However, this operation did not occur. After the strikes, the Assad regime strengthened its military presence in areas controlled by the YPG, and Russia showed it would not bow to Turkish demands despite its concerns about Ukraine. After rounds of talks between Ankara and Moscow, Russian President Vladimir Putin convinced Erdogan to talk to Damascus. Initially, the Turkish intelligence chief met with his Syrian counterpart. Later, the first ministerial-level meeting was held in December 2022 in Moscow, with Turkish Defense Minister Hulusi Akar meeting with Syrian Defense Minister Ali Mahmoud Abbas. Shortly afterwards, the Turkish Foreign Minister announced that a second ministerial-level meeting between foreign ministers would be held in the second half of January.

Russia and the United Arab Emirates are also expected to attend with their respective foreign ministers. In addition, the Turkish president stated that a meeting with Assad could be held soon. However, indicating that disagreements persist, the Turkish foreign minister later announced that the meeting will be held in early February between Ankara, Damascus and Moscow.

Although direct talks between Ankara and Damascus have been an old and robust Russian demand, the circumstances that prompted Turkey’s decision-making have changed significantly since then. For example, the myth that the Assad regime can fulfill two main Turkish demands, namely the return of refugees and the eradication of the YPG, has made its rounds in Turkey. Over the years, the Turkish opposition, constantly repeating its claims like a mantra, managed to convince public opinion in Turkey. According to a survey conducted by Metropoll in December 2022, 59% of Turks support reconciliation with the Assad regime, while only 29% reject reconciliation. The Turkish president must pay attention to public sentiment ahead of the May 14 presidential and parliamentary elections. In contrast to international perception, Turkey remains the most important democracy in a Muslim-majority country where elections matter.

However, it is not just the public that buys this narrative, as the Turkish bureaucracy and many Turkish researchers believe that reconciliation with Assad can lead to a meaningful resolution for their country.

Projects declared by the Turkish government to facilitate the voluntary return of refugees to Turkish-protected areas of Syria did not convince the Turkish public. The pace of the return, as well as the question of the source of funding for new housing and infrastructure projects, prevented the ruling party from regaining the support of the electorate.

As the issue of Syrian refugees remains one of the two most essential election issues, the Turkish ruling party has no choice but to accept Russian demands and mediation and turn to Damascus to ensure an election victory. In an atmosphere where all the Turkish opposition parties claim that they will solve the refugee issue by normalizing with the Assad regime, this move removes the main argument of the Turkish opposition.

This is a decision based on domestic political considerations, but it is also a decision where the Assad regime can only win while Turkey could lose a lot. The experience of Jordan and Lebanon shows that reconciliation with the Assad regime does not facilitate the return of refugees. However, an image of Erdogan and Assad will substantially affect the Syrian opposition, which has been dependent on Turkish political support as international support and interest has waned over the years. In addition, the number of Syrians living in Turkey and Turkish-protected areas of Syria is more than the number of Syrians in regime-controlled Syria. The Syrians have been organizing demonstrations in which they made their rejection very clear. Instead, even if there is no deal with Turkey, Assad will gain more international legitimacy as the main supporter of the Syrian opposition engages directly with his regime.

Regarding the YPG issue, Turkey has tried to solve its national security needs by launching military operations in northern Syria since 2016. However, since 2019, Russia has managed to thwart all Turkish attempts. In 2021, the United States opened airspace over eastern Syria to Russia, and Russian fighter jets and military personnel deployed in YPG-held areas prevented Turkey from launching the operation. At the same time, Turkey remains under the threat of US sanctions if it launched a military operation against YPG-held regions in northern Syria under US Executive Order 13894, which was issued by President Donald Trump in 2019 .

The combination of Russian opposition, the threat of US sanctions and the upcoming elections prevented Turkey from carrying out a military operation to address its security needs. Simultaneously, the Turkish opposition successfully championed the idea of ​​reaching an agreement with the Assad regime to coordinate against the YPG. The current talks with the Assad regime are the result of this victory.

The victory of the Turkish opposition in the public discourse on refugees and the YPG seems to be the main reason for this change in Turkish policy on Syria. However, this shift is also due to the lack of European support for Turkey and the inability of the United States to develop a roadmap in Syria that fits Turkey’s security needs while continuing the fight against the Islamic State of Iraq and al-Sham (ISIS).

For years, Turkey somehow expected the European Union (EU) to help Turkey deal with the refugee problem. The refugee deal between Turkey and the EU can be marked as the date when public sentiment in Turkey turned against Syrian refugees. The Turks felt exploited and used by the Europeans, as the EU never implemented essential aspects of the agreement, such as visa regulations and the procedure for accepting Syrian refugees into Europe. The EU believed that only meeting the obligation to provide financial aid could solve the refugee problem.

When the funds ran out, the EU held a meeting and agreed to contribute more. Speaking for itself, the EU did not invite Turkey to discuss the continuation of the refugee deal. And when Turkey understood that the route to Europe for refugees was closed, it decided to facilitate the return to Syria and hoped for European funding. However, the Europeans rejected it.

Second, the Turks always hoped that the US would one day abandon the YPG-dominated Syrian Democratic Forces in favor of the Syrian opposition. Turkish politicians repeatedly and regularly called on the United States to change policies in Syria without success. The United States, for its part, had no plan and no end in sight for Syria. US officials articulated policy tools, such as sanctioning the Assad regime, as policy goals and repeatedly stressed that they understood Turkish concerns. However, the US did not find a way to address them or listen to the Turks.

In conclusion, the unwillingness of the European Union and the United States to present and introduce a solid plan that addresses Turkey’s needs is the real reason why Ankara is taking such a high risk by talking to Damascus and following a path that will probably fail. To present an alternative, the United States should introduce a serious roadmap that combines Turkish and American spheres of influence, addresses Turkish security concerns by severing relations with the YPG for a local partner friendly to Turkey and continue to focus on the fight against ISIS. 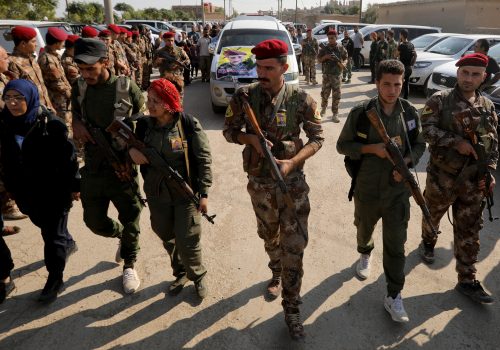 Amid US uncertainty in Syria, the Kurdish YPG sees strengthening ties with Russia

The YPG leadership is said to be reassessing the strategic importance of its ties to an increasingly unreliable Washington, and is seeking to further diversify its portfolio of international partners, with the aim of strengthening ties with Russia

'Forspoken' Review: A portal into a world without wonder or heart